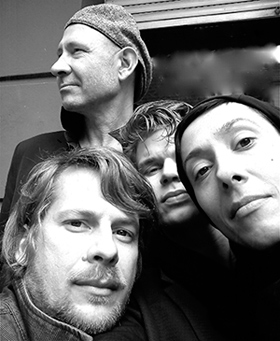 20 years after the wall came down four acclaimed musicians met in Berlin, and decided to create something new and exciting that the world hasn’t seen yet. Although they are coming from the North, South, East, and West, they have similar musical interests. They share an open approach that allows the mixture of jazz with elements of rock, punk and electronic music. This band is rising from the ash of a billions of other band corpses. The lyrics are in English, German and Serbian reflecting their multicultural richness. Kuu is playing original compositions which are oscillating between two Ninas: Simone and Hagen. They have just recorded their first CD which is coming out 2012. The working title of the CD is “the song book for the nihilisten”.